In the aftermath of the Berlin Conference, with many good proposals but without a sanction system to safeguard the final agreement, the main flaws of the deal became immediately evident. A series of continuous attacks on the ground by Haftar groups and the identification of Turkish vessels to supply Al-Sarraj with people and military assets generated no concrete reactions of the international community on the violation of the ceasefire nor on the Turkish violation of the UN embargo. For these reasons, mild accuses and no enforcement system will pave the way for an escalation in the conflict in the next weeks.
Since the first day of the Berlin Conference Haftar’s forces stopped export ports and terminals having the Libyan oil production shrunk from 1,2 million barrels per day to 320 thousand. The National Oil Corp was forced to declare force majeure on supplies – allowing Libya to legally suspend delivery contracts. A problem that may affect the many Italian investment in the region in the long run. In a recent speech, however, the ENI CEO Descalziconfirmed the Italian commitment in the region and, to overcome the situation, called for a dialogue to put the interests of the Libyan population first. The NOC capability to supply energy and provide a source of income to the Libyan population had been in fact compromised and this will soon lead to a greater economic and humanitarian problem as cities all around Libya are already in shortage of basic needs and a soon-to-be escalation of the conflict will only worsen the situation. The UNCHR decision to move its office in Tripoli and to relocate its mission is another sign that the situation is getting worse under many points of view.
Italian interests in Libya are different and all interconnected. In the sole month of January 1.273 people have reached the Italian coasts illegally. Among them, few Syrian terrorists have been acknowledged raising Italian fears on the concrete possibility of a terroristic attack. While the US Department of State set a high level of alarm for its citizens visiting Italy, this could cause major instability in the country political system. Different political exponents may in fact leverage on the insecurity of the population to gain votes during the current and next elections and lead the way to a new wave of right-wing-support that may destabilize the recently formed coalition government.
Furthermore, these days has been renewed the Italian-Libyan Memorandum with few revisions that will soon be discussed. The Italian support, as written in the memorandum, to the Libyan Coast Guard has cause not little concern in the international scenario. Different international organizations and agencies for human rights has continuously condemned the Libyan Coast Guard accused of illicit trafficking and detention of human beings and Italy, as part of the agreement, is contributing indirectly to this system. Another tricky question thus for the current Italian government that needs to secure its role as partner country to Libya but also as an accountablecountry to the international system. Italy’s interest while negotiating with Al-Sarraj government will remain the implementation of a new system of patrolling illegal flows departing from the Libyan coasts to limit the spread of terrorists in its soil.
Italy keeps having major interests in the Libyan conflict, from both economic and political point of view. The ongoing negotiations for the Memorandum may be useful for the Italian Government to gain some trust and advance its interests in the long run. Still unclear at this point what are the Italian priorities, apart from the dogma “dialogue”, and if Italy will be able to implement a coherent strategy on the whole Libyan question. 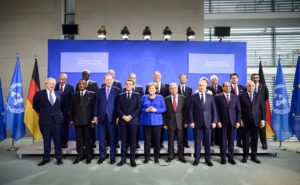