Libya’s political instability after the fall of Ghaddafi rule has exacerbated a scenario of chaos and violence in the country. A territory of wild and vast landscapes where, in the last years, power vacuum has paved the way to a variety of actors, both internal and external ones, confirming Libya as a failed state.
Currently, Al Sarraj, the leader of the National Coalition Government, supported by the UN, barely maintains its authority on the Libyan territory while Gen. Haftar, guiding the Libyan National Army, keeps a sustained control of the territory in which he acts.
While European countries keep discussing on how to proceed and where to organize the next conference to strengthen political dialogue, on the other side of the Mediterranean Erdogan secured an agreement with Al Sarraj for the control of a strategic portion of the Mediterranean Sea and the Turkish Parliament has voted in favour of the deployment of its troops to support Al Sarraj in Libya. Not so far away, Putin keeps sustaining Gen. Haftar and the Libyan National Army (LNA) both diplomatically and military trying to take advantage of the political vacuum – that, at this point, no Western country has been able to fill – to impose influence in the Mediterranean.
France and Italy that seemed, from the European side, the ones more prone to act – the former with its economic interests and fear of a terrorism escalation, the latter with a variety of concerns ranging from economic investments to borders security – are, at this point, actors in the background. The double game played by the French Government and the lack of a clear vision of the Italian one, destroyed their credibility. Gen. Haftar is now expected in Rome, where the Italian Minister of Foreign Affairs will try to initiate some dialogue after the clear failure of the Palermo Conference. At this point, the Italian position is too weak to be relevant and the meeting will only confirm the inadequacy of the Italian leadership.
During the Ghaddafi rulership Italy has been able to maintain its interests in Libya via a series of mutually benefiting agreements, ranging from energy supply to arms selling with major Italian investments involved also in infrastructure building and clearing mines projects. ENI company and its assets, such as the GreenStream pipeline, plays a major role in supplying the Italian peninsula with natural gas and lessening Rome’s dependency on Russian imports. Furthermore, Libya has also been a close partner in border control. Libya’s natural contiguity with the Italian coasts, indeed, make it an easy point of departure for thousands of migrants that Italy is nowadays struggling to manage causing internal social and political disputes.
On the southern flank of the Mediterranean, Arab nations such as Saudi Arabia and UAE are opposing the growing Turkish influence in support of Al Sarraj leadership. A Turkish control would be refused by most North African countries and it would be seen as an illegal foreign intervention in the name of Erdogan new Ottoman aspirations in the region. A Russian leadership, on the other side, would reaffirm Western countries fears of Putin’s willingness to destabilize Europe on different flanks. The Arab League stated its dissent for the decision; Algeria and Egypt, that support Gen. Haftar’s role in fighting terrorists at the country’s borders, strongly condemned the recent commitment to send Turkish troops on the ground. Erdogan’s move will generate the desired outcome and, even if the troops will probably be deployed late this month, he will have room for manoeuvre while negotiating with Putin on the 8th January. After that date, if a deal will not be reached, the ongoing advancement of Gen. Haftar troops will for sure have a trump card to play.
In the next days and before the next Berlin Conference, a delegation of European leaders will fly to Libya to strengthen diplomatic dialogue. But even more interestingly, on the very same day, Erdogan and Putin will meet in Istanbul to inaugurate the TurkStream. On that occasion, while showing the world their growing convergence and their strong commitment to play a relevant role in the game of energy supply in the Mediterranean area, the leaders of Turkey and Russia will, for sure, settle the ground for a solution bargaining their influence on Libya’s leaders. Indeed, while the two regional powers seem on two different sides in the Libyan scenario, they will probably be the key for an advancement in negotiation.
At the end of the day, European powers will organize another conference meanwhile Erdogan and Putin will crystallize their influence and their priorities in the enlarged Mediterranean. Furthermore, the killing of Soleimani will probably drag the US back at the table where decisions are made and while mediating an escalation in the Middle East – where Russians and Turkish keep their interests as well – the United States may try to settle the rules for a repartition of Libya with the Turco-Russian axis. 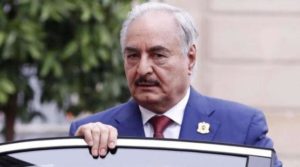