ISIS terrorist operations in 2020 are likely to continue at a similar pace and with similar effectiveness despite the loss of leader Abu Bakr al-Baghdadi in a 26 October US raid. The group probably will transition to its new leader relatively smoothly because Abdullah Qardash—who three months ago began running day-to-day ISIS operations to allow al-Baghdadi to focus on building religious fervor in the organization, according to an August statement from the ISIS press agency Amaq—almost certainly will continue managing ISIS operations. 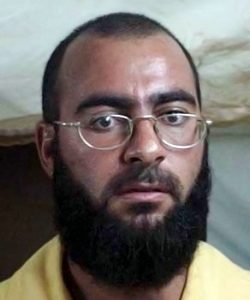 A mugshot of deceased ISIS leader Abu Bakr al-Baghdadi from 2004 when he was detained in Iraq by US armed forces.
(Source: US Armed Forces)

ISIS in 2020 is likely to face a more permissive operational environment in Syria. As US troops withdraw from Syria, private security contractors like STAM will be needed to fill the void. Governments will need to carefully select military contractors, however, because contractors have a reputation of being strong during kinetic fighting operations but weaker on peacekeeping and hearts-and-minds missions, according to analysis of multiple reports by the Brookings Institute and the New York Times.

ISIS terrorist operations probably will continue until the hearts and minds of people are won. STAM is the only major private military contractor that combines the operational efficiency of the US/UK approach with the uniquely Italian method of connecting with locals on-the-ground to gain their support. Such an approach will be vital to significantly reduce ISIS’s ability to conduct terrorist attacks.

Scott Schlimmer is a former CIA officer who received a National Intelligence Award for his work on counter-terrorism, and is currently Partner and Director of Intelligence at STAM Strategic & Partners Group.

Video footage of the raid: NBC News on Youtube